Moira and I probably should have made this video a while ago, but here’s how to use SuperSaas!

SuperSaas is how all equipment rentals are reserved and recorded. If you need something for a specific time and date make sure to create an account and reserve that camera to make sure no one else gets to it first!

Hey how is everyone doing! I hope everyone enjoyed True Blue weekend and everything that happened this weekend. COM Club should be up sometimes this week so be on the lookout for that on our YouTube channel at COM Club . Also a reminder that COM club is on Thursdays at 2pm in the DMaC lab. While everyone is getting sick ( including myself) I hope you’re staying healthy during flu season. I’m going to keep this one short and ill see you guys next week!

I is a little late but welcome back to Hilbert, my name is Elias and I am a work study here over at the DMaC lab. That means I am one of the few people allowed to check out equipment from lockup, which includes cameras, tripods and many more thing. I am a senior here and very excited to be finishing up school this year. Last, I am also the vice president for the COM club and what we do in the COM club is right now we are making a tour video of the lab followed by tutorial videos on how to use some of the equipment that we have in the lock up. Please feel free to join our club we have our meeting at 3pm on every Thursday and I hope the rest of the semester is great!

Hiya everyone, first off my name is Eli Todd and I am one of the new members for the DMaC lab staff. Below is a picture of me when i had shorter hair and with my cats!

I am a junior here at Hilbert college working on getting my  Bachelors of Arts and Sciences degree in Digital Media and Communications. I enjoy filming and editing videos. The three main places you’ll be able to find me is in the DMaC lab, getting food in the cafeteria or in the weight room.  Some of my hobbies include, gaming, filming, and reading.  I am also part of the Com Club and if you’re interesting in joining we meet on Tuesdays and Thursdays at 4:30. 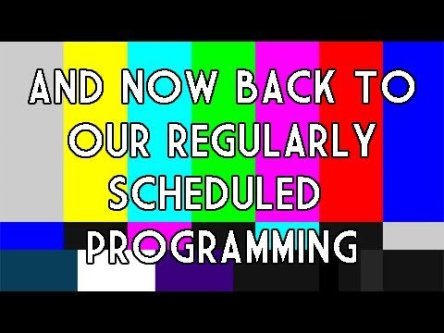 Welcome back to another semester here in the lab! It’s shaping up to be a good one! We have a couple of announcements to get out of the way before anything exciting begins.

First off is with our old work study, Dave, gone and graduated we have a position open in the lab. If you’re looking for a job on campus, want to further your knowledge of the field, and have the opportunity to help your fellow classmates this is the one for you! Applications are due to Steven Fox by the end of this week.

If you don’t want to work in the lab but still have an interest in a work study in Digital Media perhaps you would enjoy working with Ian Gattie in the Office of Institutional Advancement as a Digital Media Specialist. The Digital Media Specialist is responsible for creating and managing digital-related projects for Hilbert College through photography, digital design, and video work. Trust me Ian is a really cool guy and this work study is a great for the portfolio.

Com Club and PRSSA are joining forces under the Com Club name. Meetings will be held weekly on Tuesdays at 4:30 in the DMaC Lab!

Last but not least if you’ve been in the lab at all this week you’ll have heard the faint sound of music. Hawk Radio has returned and it’s home base is now in our “On Air” room! Welcome Back Hawk Radio!

Hawk Radio is our on campus radio station, playing anything you want to hear. Listen at hawkradio.hilbert.edu. For more info, contact Don Vincent (dvincent@hilbert.edu), they are currently looking for on air personalities and recommendations for any music people on campus would like to hear.

Thats all for now! -Moira

As you know the semester is winding down and Christmas is just around the corner. While we realize this can be a hectic time for exams/projects all Lab Equipment Rentals must be returned by THURSDAY, DECEMBER 8TH, 2016.

If you need anything past this date please contact Steven Fox directly, either in person or via e-mail sfox@hilbert.edu.

Thank you and good luck on exams!

I’ve been watching this laptop since it’s announcement at the end of August. The Lenovo Yoga Book, a 2-in-1 laptop/tablet, captured my eye with it’s bottom half and the included pen/stylus.

The Yoga Book specs are not all that impressive, which is normal for Lenovo convertibles, and already makes it hard for me to love this technology. The Yoga Book comes with your choice of Android Marshmallow or Windows 10. They both feature Intel Atom x5-Z8550 processors, 4GB of RAM, 64GB of on-device storage, and 1920 x 1200 resolution displays. The Android version starts at $500 and the Windows version starts at $550.

What first grabbed me was the bottom half of the 2-in-1. They’ve gone away with the normal keyboard and have replaced it with a Wacom tablet. However with the touch of a button the tablet will light up with a “halo” keyboard. Looking at photos of this in action might make you think of your favorite Sci-Fi movie, I know I did. However because this is the first of it’s kind, the keyboard comes with issues. Many places such as Gizmodo and The Verge have reported issues when using the keyboard, such as delayed response and increased typing errors, most likely due to the non-real keys.

The tablet bottom paired with the stylus can be used as a drawing/writing surface. When placing a piece of paper on top and using the stylus’ pen function not only will you get a physical copy of what you’ve done but also a digital one. Very cool for the inspiring artist/designer. 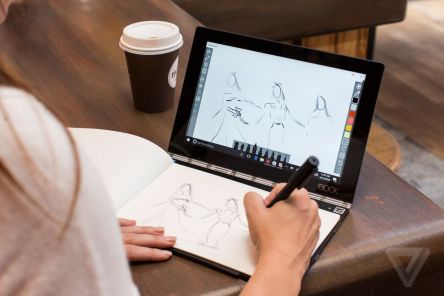 As for the rest of the Yoga Book it plays with it’s place in the world. Reviews say it’s a bit clunky and awkward running Lenovo’s version of Android, and it isn’t much better as a Windows unit. Android is awkward with the size of the screen and it’s ability to run multiple apps at once has you leaning in to read what it actually says. With Windows the entire unit is just plain slow, and Lenovo’s predicted 15 hour battery life becomes small.

The shell of this computer looks gorgeous and just needs a thin red string to complete the notebook look. 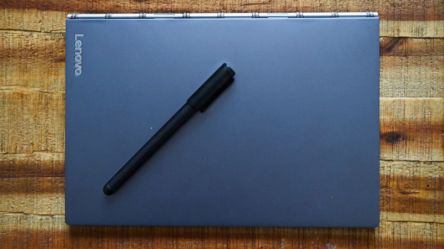 I have much hope for a computer like this to become something amazing but for now it’s just a show piece and a bit of a circus freak in the world of technology. The two futures I see in this are to bulk up the specs and appeal to the users of Wacom for use with Adobe Products or to push convertible laptops off to the side to die out.

I sincerely hope it is the first and this is the future of mobile computers.

Review of Windows 10 version: The Verge

As some of you may know, The Scribe is Hilbert’s very own student organized newspaper (well, under the supervision of the awesome Dan Higgins, that is). 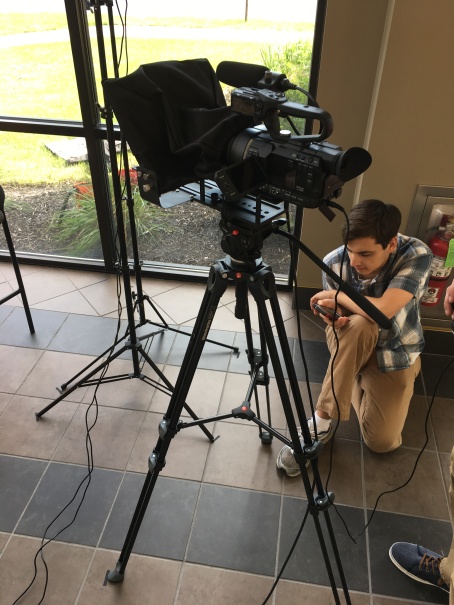 4K camcorder with a teleprompter. #Crispy

In conjunction with this digital publication, COM 475 is currently in charge of creating Scribe TV. This is where the written digital word is put into the form of digital video.

This is probably the best place we’ve shot in (IMO).

Everyone working on Scribe TV has a dedicated role into making sure everything runs as smooth as possible. Here’s the breakdown of roles, for those who are curious: 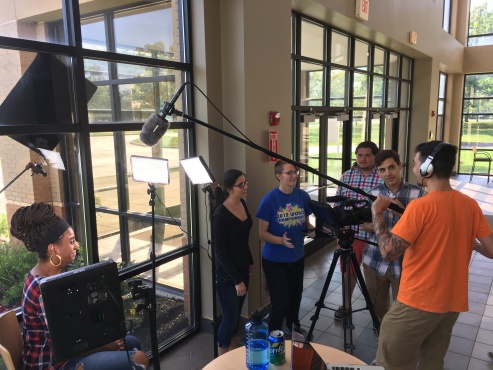 Look at those happy faces!

And that leaves me, the one writing this article. I serve as the Executive Producer. That’s just a fancy term that means I oversee everything and help out where needed. I’m mostly on set helping to set up at each location and making sure our news anchors are comfortable.

We don’t necessarily have a studio space, so we’ve shot in multiple locations around campus so far. It adds an interesting dynamic, mainly because each space has its pros and cons.

All jokes asside, there’s a lot that goes into the production of The Scribe and Scribe TV. Everyone who is involved plays an important role and everyone is gaining valuable experience that they can apply to their careers after Hilbert.

If you recall, last semester I wrote an article about the Sony a6300. In September of this year, I went from owning Canon DSLRs for the last 5 years to a slightly proud owner of a Sony a6300.

It’s a cool little camera. I’ve used it on a decent amount of shoots so far. I have run into the issue of overheating, so that’s kind of a problem. The 4K video you get looks nice, and I export in 1080p anyways, so I get a sharp 1080 file.

But this isn’t about the a6300… this is about the newly announced Sony a6500. It’s pretty much the same as the a6300, but the a6500 has a touchscreen and 5-axis image stabilization. Both of these features are missing from the a6300.

What are you shooting with? Have you moved to shooting video in 4K? We have a few new 4K cameras this semester, including the Sony a7S II. If you’d like to rent one for your production, come see me in the lab.